A young healthy mom is now dead, and the death could have been avoided.

It's not rare and unusual, it's far too common and they're absolutely ignoring this and it is infuriating. I've got two friends who are being forced into getting vаccinated, one of them this week and I'm honestly worried for them.

The woman died from what is being labeled as "CΟVID Vаccine-Induced Thrombotic Thrombocytopenia". This is a woman who didn't want to get vаccinated.

This is what her obituary read:

Jessica fully embraced motherhood, sharing her passion for life with her daughters. Jessica’s motherly commitment was intense, with unwavering determination to nurture her children to be confident, humble, responsible, and to have concern and compassion for others with high morals built on Faith.

Jessica’s greatest passion was to be the best mother possible for Bridget and Clara. Nothing would stand in her way to be present in their lives. During the last weeks of her life, however, the world turned dark with heavy-handed vаccine mandates. Local and state governments were determined to strip away her right to consult her wisdom and enjoy her freedom. She had been vehemently opposed to taking the vаccine, knowing she was in good health and of a young age and thus not at risk for serious illness. In her mind, the known and unknown risks of the unproven vаccine were more of a threat. But, slowly, day by day, her freedom to choose was stripped away. Her passion to be actively involved in her children’s education—which included being a Room Mom—was, once again, blocked by government mandate. Ultimately, those who closed doors and separated mothers from their children prevailed. It cost Jessica her life. It cost her children the loving embrace of their caring mother. And it cost her husband the sacred love of his devoted wife. It cost God’s Kingdom on earth a very special soul who was just making her love felt in the hearts of so many.

But social media is saying that this story is misleading! 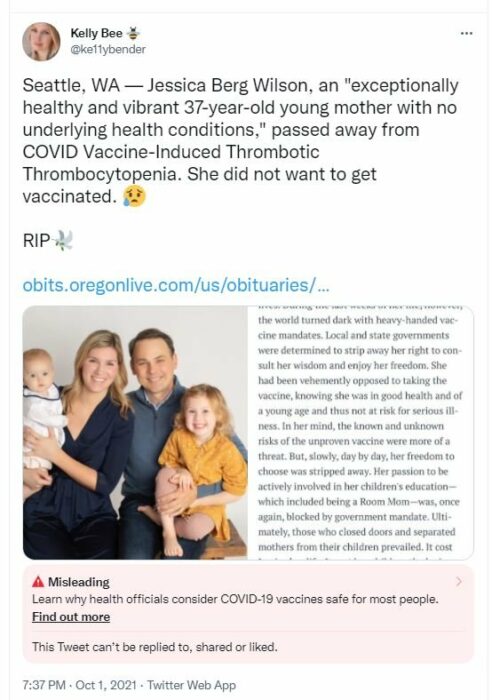 It is an absolute shame and a disgrace that our government and our media are so grossly corrupt and full of propaganda that they don't allow the truth.

I know their argument is something along the lines of, "Well, that hasn't been PROVEN with science." Not everything is provable with science and honestly, not everything needs to be proved with science. How much anecdotal evidence is needed before these morons shut up with their lies?

Honestly, a better question is how long are we going to allow this to continue before we take control over the media? All of this censorship is made possible because liberals own these companies and have an agenda.

UPDATE: It appears that Twitter has removed the misleading label, at least for now.

Back
Send this to a friend