Nancy Pelosi seemingly dug deep and took a strike at President Trump calling him morbidly Obese. Adding also that he shouldn't take a medication to prevent the coronavirus because it is extremely unsafe and has potentially deadly side effects.

While I would be worried about taking the pill I also would just listen to my Dr. then know it all Pelosi.

Many have an issue with this as they are afraid that it will persuade Americans to want to take hydroxy.

According to The Daily Mail:

The president shrugged off warnings about the side effects of hydroxy issued by the FDA and the National Institutes of Health. Both medical organizations note the drug is only approved for the use of patients in hospitals who have been diagnosed with the coronavirus.

At least two White House staffers tested positive for the coronavirus this month, both of whom had access to the president: his Navy valet who serves him meals and Vice President Mike Pence's press secretary Katie Miller, who speaks for the Coronavirus Task Force and is married to Trump senior adviser Stephen Miller.

After the outbreak, new safety protocols were put into effect at the White House, including daily testing of senior staff who get close to the president. Additionally, staff and Secret Service agents have started wearing face masks around the complex, where close working conditions make social distancing impossible.

Trump last underwent a partial checkup in a November visit to Walter Reed National Military Medical Center that was not on his public schedule. He has said in March he would complete his physical in the next 90 days.

At his last physical Trump weighed 243 pounds, which is considered obese for a man of his reported height of 6 feet 3 inches. Past reports said he's taking rosuvastatin, a lipid-lowering drug, to control his cholesterol.

The president has touted his love of steak and fast food. His only exercise is golf, which has been on hold since early March as the coronavirus pandemic causes courses to be closed.

Hydroxy has potentially serious side effects, including altering the heartbeat in a way that could lead to sudden death, and the FDA has warned against its use for coronavirus infections except in formal studies. 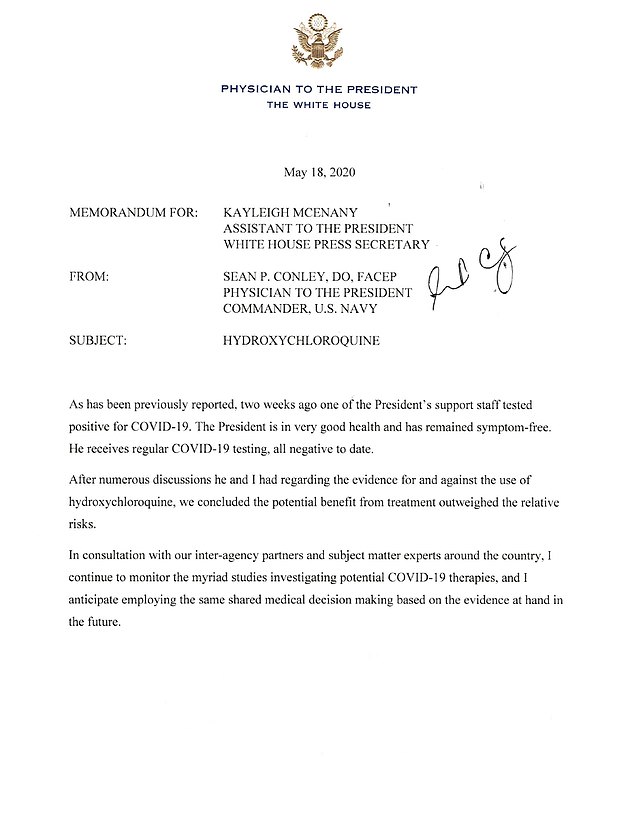 Trump told reporters that he is taking it once a day with other medications. He says,

Previous JCPenny And 3 Other National Retailers File Bankrupsy, Drowing Due To The Pandemic