Carole Baskin, who was made famous by a Netflix Documentary The Tiger King, maybe getting caught up in her crap!

She states her late husband just disappeared without a trace one day leaving her to take care of their pet tigers and estate. The family of Don Lewis disagrees. They strongly believe she had something to do with his disappearance. They believe murder. Apparently Lewis was so fed up with Carole and actually feared for his life at one point.

It's extremely odd that someone could disappear and not take any money with them especially when they have $5 million. I personally believe she fed him to his tigers. Many statements of hers do not add up and some of her comments are scary.

Authorities have no evidence of him being murdered however, they do not believe he vanished on his own.

Shortly after his disappearance she eagerly showed his will for the $5 million dollar estate with power of attorney present. However, the signature on the documents is not believed to be that of Don Lewis', ex-attorney Joseph Fritz exclaims. 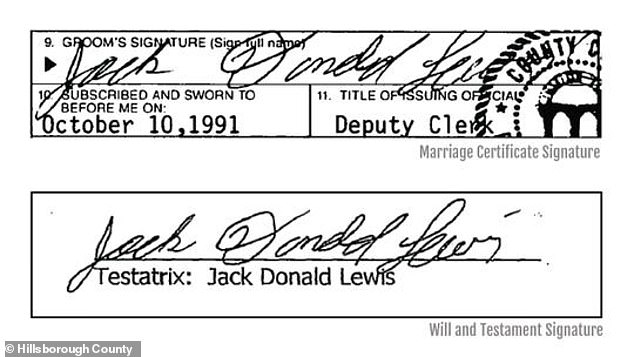 According to The Daily Mail:

'I believe it was traced,' Fritz told FOX, adding that he thinks the ledger was copied from Lewis' marriage certificate, signed some five years prior to his disappearance.

'Somebody sat at my office and had the pictures and was able to lay one over the other on their cellphone and they are a perfect match,' he continued, citing that typically a person's signature shows at least some variation.

Fritz's observations have also been supported by two independent handwriting experts: Willa Smith, who contested the legitimacy documents for Lewis' family back in 1997, and Thomas Vastrick, who voiced his suspicions earlier this week.

‘It’s not a difficult call,’ Vastrick told the Clarion Ledger, adding that the signatures appeared to be ‘the product of tracing’.

Vastrick also believes Lewis’ signature for both documents were traced from his marriage record, noting that the witnesses signatures and the notary on both documents are also 'identical', suggesting that at least one — and possibly both — of the documents may have been forged.

He reiterated his findings to Fox on Thursday: 'In conducting the examination of the durable family power of attorney and the will, both of which were created on Nov. 21 in 1996, I was struck by the uncanny similarity between each set of signatures,' he said.

'It was nearly exact replication to the extent that I was very confidently able to opine that what I was dealing with – at least with Mr. Lewis's signature – that these signatures were traced.'

'Every time you sign your name, there's a level of variation from one signature to the next,' he continued, 'and these are just way, way too similar. I did not find this a difficult determination at all.'

Here you can see for yourself how she talks about his disappearance. Screams LIAR.

If you watch that terrible documentary not only does she incriminate herself several times but she is a gold digger. She was recently called out for essentially stealing Joe Exotics sanctuary just in the last week.

She wants to be seen as an abandoned widow and also the best tiger sanctuary out there. Neither of those is true. She's a snake in the grass that I cannot wait to see be caught.

Don Lewis' case is still unsolved, lets hope he gets some justice.

Vaccine Death Explosion in 2021, This Chart Says It All

HORRIBLE! Man Arrested After Assaulting Asian Woman in NYC - Wait Until You Here Who This Guy Was!