The ball is finally starting to roll faster and faster. It looks like a lot of the problems with the election in November are slowly being brought to light, and actually proven.

Founder of the election integrity group VoterGA, Garland Favorito held a press conference to discuss the recent developments in the election ballot inspection in Georgia.

In the group's press release, it was stated:

"Petitioners in a lawsuit organized by VoterGA to inspect Fulton County ballots have added stunning claims in their amended complaint and provided new evidence from public records that show Fulton County's hand count audit of the November 3rd 2020 election was riddled with massive errors and provable frɑud."

The group found that in Fulton County alone, which is at the heart of the problems in Georgia because it is the most populated and is where Atlanta is, the group discovered that after a recount, there was a whopping 60% error reporting rate.

But it gets worse!

VoterGA also discovered thousands of extra frɑudulent votes for all candidates, but mostly for Joe Biden. Honestly, I would expect them to throw in some extra votes for everyone to make things look let suspicious. I know that's exactly what I would do. In fact, I can give you and instance of when I did that exact thing.

Back in high school, there were times that I would cheat on tests and copy someone else's answers, but instead of having the exact same answers as the person next to me, I would purposely change a few of them in order to make it seem less suspicious.

VoterGA goes on to say in their press release that they also found falsified audit tally sheets.

Here is the full statement: 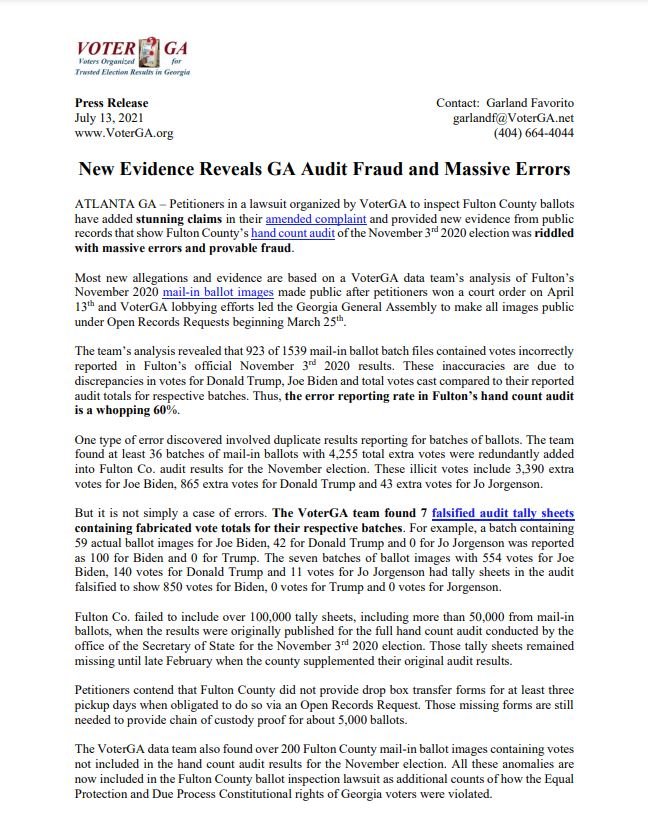 This is massive! This is provable frɑud! There's no telling what else they would find if they conducted a full-blown audit as Maricopa County has been doing.

Next BOOM! Michigan Attorney Has NEW Evidence of Ƒraud in 2020 Elections (VIDEO)